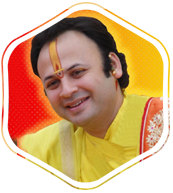 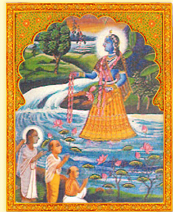 Shree Yamuna, the greatest among the great rivers is also known as the Queen consort of Lord Shri Krishna. She is the daughter of SURYA (the Sun) and brother of Yama (The god of death) and Shani (Saturn).Goloka the divine abode of the Lord is the home of Yamuna. When the Lord dictated Yamuna to descend on the earth, she first went round Shri Krishna. Thereafter, with great force, she descended on the peak of Sumeru Mountain. Her journey began thence towards the southern side of the great mountain chains. and reached a peak Kalind, to start her journey downwards since Yamuna began her journey downwards from the peak Kalind, hence she got an epithet Kalindi. Crossing and piercing many peaks and wetting expansive plains in the way, Yamuna travel fast to reach Vrindavana and Mathura in Vraja region. 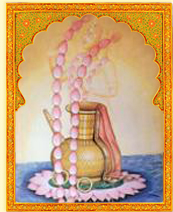 In Gokul, the extremely pretty Yamuna constituted a group of teenaged girls to participate is Raas of Lord Krishna. She also selected an abode there for permanent stay. In Pushti Marg, Shri Yamunaji occupies the most important position as the "Beloved of ShriNathji". Shree Radhikaji and Shree Yamunaji are both indispensable Sakhis or Soul mates of Shree Thakurji. She is not merely a river, but literally fluid form of Bhakti,utter devotion which flows eternally. During the Divine RAAS when Shree Radhikaji was upset with the sudden disappearence of Shree Thakurji (to bring down the ego of other Gopanganas), shree Krishna sent Shree yamunaji in his own costumes and ornaments. She looked exactly like Shree Krishna to wipe away the gloom from Shree Radhikaji's face. Since then Shree Yamunaji is always seen in clothes and ornaments similar to shree Shreenathji (Shree Krishna). 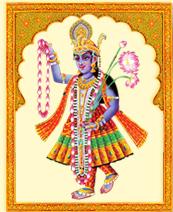 She is the very embodiment of divine grace. Shrimada Vallabhacharyaji gained his first darshan of the Lord through Her grace.When he first came to Vraj, AcharyaShri rested on the shores of the holy river - Yamunaji. The place where he first rested, was (at that time) just outside the small village of Gokul. There, the She appeared before him and through Her grace, Acharyaji was able to talk directly to the Lord Himself. This place is now hallowed as the Thakurani Ghat. He It is here, that the Lord came to talk directly to Shri Acharyaji at midnight on the 11th day of the bright fortnight of the month of Shravan. At this time, the Lord gave Vallabhacharyaji the key to free souls from this wicked age of Kaliyuga. As Shri Yamunaji was the intermediary for this first meeting, AcharyaShri expressed his gratitude to Her by writing his famous Yamunashtaka. Of his 16 main works, written for advising and guiding his devotees, 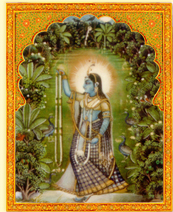 this is probably the most important hymn in Pushti Marg. Shri Mahaprabhuji was so impressed by the power of the place, he decided to have a house built near the area at Adel. There are many festivals and major religious celebrations celebrated on the banks of the confluence. Thus Shree yamunaji holds the position of any inetrmediater between Shree Goverdhannathji and his devotees. There are many literary works available even today dipicting the glory and grace pf Shree Yamunaji on pushti souls .